Have you ever notice how children, from babies to teen, agers own their aging?  Babies obviously delight when they discover that their fingers can pick up cereal tidbits on their trays and then that they can drop things.  What fun!  They find that arms and legs are great for waving about and playing with.  But on the floor they can be used to crawl about—on their own! That standing, though teetering, is better.  And soon even walking isn’t enough.  They can jump, and gallop.   In their twos they discover that saying “NO!” with vehemence gets adult attention in surprising ways.  Aha!  Words can be powerful.  And as they gain capacities and competence they seem to own every stage of their childhood.  Not always easy or pain-free, but it’s theirs!  And all along the way, most babies and children have the encouragement of their own cheering sections.  As they grow older, there are schools, teams and clubs to foster their development. Advertisers cater to their needs and demands.  They are encouraged to “Grow up!” “Act your age!”  There are formal celebrations at different stages.

In the adult years, capacities continue to mature and settle in, becoming increasingly taken-for-granted.  It becomes clear in society and job markets that capacities affect status, reputations, positions, and rewards.  There are real incentives to sustain, grow and own them. And there are disincentives to having observable signs that aging is changing them.  Now, the advertisers’ focus is on products and services to mask or delay evidence of aging.  No one is urging them to, “Grow old” or “Act your age!”

During my own middle years, my profession included learning about age related changes (ARCs) and caring for ill aged; so ARCs really didn’t present any surprises.  But “knowing about” though useful, proved to be distinctly different from my insider “living with” and “owning”. And as aging progressed, I discovered that even learning how to live with aging intuitively was not enough

Over a period of decades, my ARCs demonstrated to me, persistently and sometimes vigorously, that I was going to have to live with their impact on specific aspects of my daily living.  Repeatedly, I dropped objects, had difficulty picking up and manipulating items.  I couldn’t cut up the meat or tender-crisp vegetables on my plate.  I became increasingly insecure in moving about without my walker.  Words were there when I didn’t need them, but not when I did.  I didn’t want to own any of these.  But with ARCs inevitable progression, I realized my intuitive, take-for-granted approach was not working. It was time to adopt the old saw, “If you can’t beat ‘em, join ’em”.  So I set about owning and engaging with them.  They were and are my current “me”.

I found that my approach changed from focusing on the loss experience to a more neutral approach of exploring the basic elements of each ARC as data, facts.   Sometimes I started with the ARCed capacity.  How was it changing?  What were the specific activities in daily living it impacted?  What was the impact?  At other times, my starting point was unhappiness with some messed-up daily living element, and then working backward to the ARCed capacities causing it.  With either starting point, I found myself dealing with concrete, specific elements in each and the linkage between them.

What a difference this “working” perspective and approach made!   Eureka! I was gaining some control. I was triumphing in little, but significant ways.   Not the unalloyed delight of childhood, but mature, quiet joy! I had created my own incentives for owning my aging self.  I could say, “Grow in your aging!”  “Act your age! “  “Own it!” It’s you!”

On an early December late afternoon I sat at the computer, completely focused on the EWA manuscript on the screen.  Eventually, writing for the day came to an end, so I clicked Save and turned off the computer screen.  The room suddenly became totally black! I found myself surrounded by black in the room and the hallway, black outside the big window.   Unable to “see” I found myself discombobulated and helpless!   Fortunately, this time salvation in the form of my walker was close at hand; I had a safe means to reach the light switch.  Talk about re-learning the hard way!  I knew better.  I knew we’d gone back to Standard Time weeks earlier.  I knew the days were shorter.  I’d had earlier experiences of becoming disoriented and feeling out of balance in dark rooms.

So, should I have been so surprised by my helplessness in the face of sudden darkness?  No!  I knew about ARCs (age related changes) in eyes.  I knew about planning ahead to have lighting available at all times during the dark hours.  But once again aging sharply reminded me that “knowing about” is not the same as “living with” They are two very different levels of learning and knowing—as this incident clearly highlights.   It also reminded me that earlier experiences didn’t necessarily assure that I’d actually engage in anticipatory planning.   Engaging with Aging is ongoing, thoughtful, hard work involving   ongoing awareness and applying previous knowledge and experience.

In any case it seemed prudent to re-visit the anatomy and physiology of seeing, particularly seeing in the dark when one is aged. (*** indicates application to darkness.) 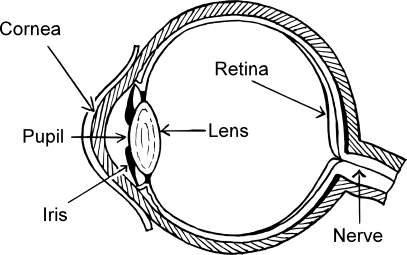 Lenses lose the ability to change shape, resulting in decreased ability to read or see close details without glasses.  ***They also become less transparent and so let in less light.

Pupillary muscles   *** that control enlarging of the size of the pupillary opening weaken so they end up being smaller and allow less light to reach the retina. (in our 60’s we need three times more light to see well—no wonder I want higher wattage lights in all the rooms), *** It also adapts much more slowly to sudden changes in light, so the few seconds after a sudden light change are high risk times.

Retinal cells that respond to color become less sensitive so colors are less bright.  It affects mostly yellows and blues.

Field of vision decreases so that by 80, peripheral vision is 20-30% narrower.

My rude awakening to the risks of earlier darkness of the evening triggered the need to put EWA to work.  It involved planning in advance for the lighting needed to be able to move around the house safely.  If that room would be dark when I turned off the light I was using, I needed to pre-plan by turning on other lighting prior to it getting dark.

For me the highest risk area was the living room where I spend my evenings.

It meant turning on a hall light or one of the kitchen lights, so that when the lamp next to the recliner was turned off, there would still be light to move about safely and comfortably.

The question remains as to whether my now-undependable short term memory will allow me to remember to do this as I enter the room in the late hours of the day.  A son declared he was not taking any chances on my unpredictable STM.

He brought over and installed night lights in every room where they didn’t already exist.

Update:  Weeks later, I still am remembering to plan ahead for the needed lighting and the automatic night lights help.  No disorientation, no falls!